In 2015, I invited school district colleague Uti Hawkins to speak to my students about Native identity development. In my invitation, I lamented that, while I could find identity frameworks for several racial groups, I could find no frameworks for Natives. So Uti wrote her own framework.

Since Time Immemorial (Origin of Time) – Identity was rooted in origin stories, attitudes that related to the responsibility with the land, and tribal (nation) sovereignty.

Seeing historical knowledge and civilization integrity in an accurate timeline.

Identity was shaped by tribal traditions, community role, family status, and survival  need/customs that had developed over thousands of years.

Way of life was balanced. Identity was not designated or segmented by religion and civilization.

This is what is taught but with higher level understanding of timeline, one can transpose Native identity as evolutionary, transformative, and modern (out of the past tense).

Why “invasion”? It was WAR on land and identity.

A series of negotiations and small eye-opening events that had a culminating effect, as the war strategy was to de-Indianize.

Euro-invaders acting to colonize, mission, and extract resources – “teaching” Natives to be “Euro-civilized,” institutionalized religion, forced labor, property ownership. No follow through of Treaties and refusal to implement responsibilities.

Historical Accuracy – Policies for Genocide and Killing of the Indian Identity

1776 Early U.S. history (Invention of the Savage): taking away tribe and nation identity to build the Indian stereotype and killing the individual Indian.

1830 Removal Era (Segregation to Internment Camps): war, removing the presence of Indians from the mainstream and removing Natives from their land identity.

1850 Reservation and War (Assimilating and Conquering): destabilizing tribal structures and conformity to social and economic structures of rural America, removing the community identity from the Indian person, war on children, religion, POWs.

Oppositional Identity – negation of their culture

Inter-tribal fighting for resources and quantifying being Indian enough.

Stopping the speaking of the language publicly and the expressing of traditions in community settings.

New perspective of “success” in education, job, and appearance.

Loss of Elders from war, disease, and foster care.

Denial of Native blood or assimilation by physical appearance.

Lateral violence and bullying within the community.

Appearance wearing or buying Native made clothing, jewelry and art.

Acknowledgement and learning of intergeneration-historical trauma.

Activism in helping better the community within and action to change the mainstream.

Quantified by others vs. ownership of Native experience.

Substance abuse to medicate past trauma and current trauma.

Responsibility to better generations ahead (7 generations), appropriation of history and Native studies.

“This is a model that was created by Alex Wilson, an Indigenous person and scholar. What she talked about was the complexity of identities for indigenous people. It’s not a staged model and it’s much more intersectional. One takes into consideration the indigenous group that they belong to, the sexual identity, the gender, the culture, community, spirituality, ancestors and the earth. Wilson says the identities of an indigenous person have to be seen within the context of all of these other aspects of culture, religion, spirituality, one’s relationship with the earth, one’s relationship with others.” 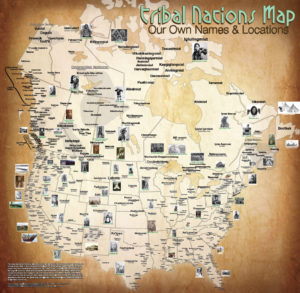 Native-Land.ca, a resource to help North Americans learn more about their local history

The Map Of Native American Tribes You’ve Never Seen Before, from NPR

How I Feel As a Native Woman When Trump Idolizes Andrew Jackson, from Teen Vogue

4 Ways To Honor Native Americans Without Appropriating Our Culture, from Everyday Feminism

8 Native women you should have learning about in history class, from Hello Giggles

8 Things The History Books Don’t Tell Us About Native People, from Everyday Feminism

5 Girls on Why They’re Proud to Be Native American, from Teen Vogue

9 Questions Native Americans Have For White People, from Buzzfeed

Two Spirits, One Dance For Native American Artist, from AJ+

Where the Spirit Lives, a CBC TV movie depicting the boarding school movement in Canada