Upcoming and Urgent Events in Seattle 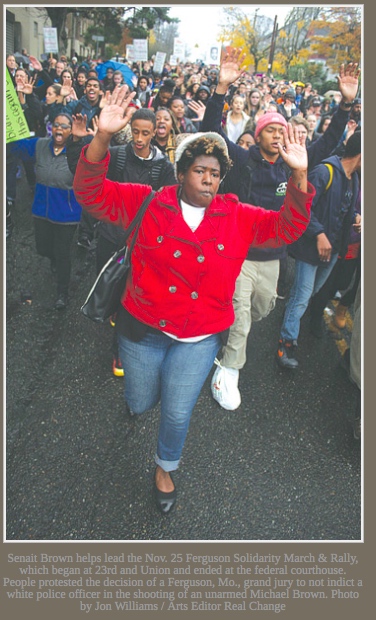 In the wake of the grand jury’s decision not to indict, communities continue to organize to demand justice.

Despite the national scrutiny of police abuses since we lost Michael Brown on August 9th, the loss of Black lives, many of them teenage lives, at the hands of the police continues. Despite key differences, many have drawn parallels to lynching, largely due to the frequency of the killings, the ability of the police to kill with impunity, the lack of just causes, and the stereotypes on which police base their fears. Among Darren Wilson’s many dehumanizing descriptions of Michael Brown, he went as far as compare Brown’s face to “a demon.”

In Seattle, there are two events to demand change, both on Monday, December 1, both have people converge on Westlake Park.

The first, the Hands Up Walkout, is set for the precise time of Michael Brown’s death, 12:01 p.m., Central Time Zone (10:01 a.m., Pacific Time Zone). Monday is significant because it would have been Michael Brown’s first day of college, according to event organizers. Learn more about this student-focused national movement here: https://www.facebook.com/handsupwalkout

If you are following from outside of Seattle, my primary source for mobilization efforts has been the Ferguson National Response Network. Through this site, I even found a small gathering in Morristown, New Jersey during a family trip to the East Coast.

On Tuesday night, Garfield High School teacher Jesse Hagopian will demonstrate that teachers can have an impact far beyond the classroom walls. Come to his book release of More Than a Score: The New Uprising Against High-Stakes Testing, featuring Wayne Au, Mallory Clarke, and Falmata Said. The Nation has called it one of the top “five books to build a movement for educational justice.”

Many of you might remember Jesse Hagopian as one of the faces of the MAP test boycott. He has also played a key role in galvanizing union membership in Seattle.

Most recently, he has helped spur a movement to ensure elementary school students receive valuable recess time, disproportionately scaled back at schools with high percentages of students of color and low-income students because of the emphasis on testing.

Come support Jesse and take a stand against the proliferation of high-stakes testing that is replacing meaningful education. RSVP at: https://www.facebook.com/events/734641616626151/