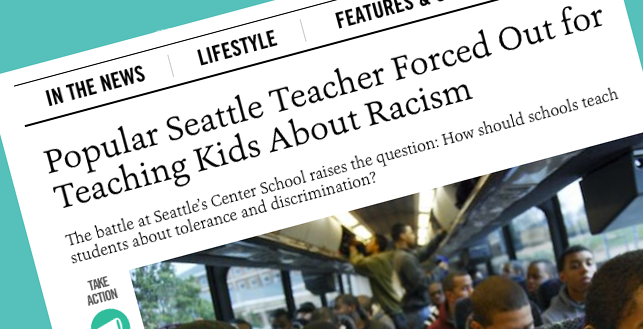 Hello all! In the coming weeks, there are two opportunities to learn more about the story of the Race Curriculum Controversy, an ongoing struggle that has, among other things, hindered teachers’ ability to challenge racism and shown that–even in a progressive city–white privilege can trump racial justice. The hope in telling the story is that such a situation never repeats.

The speaking engagements at the University of Washington and Bastyr University are free and open to the public. Please spread the word!

My profound gratitude for the community support continues, as it is due to the efforts of concerned educators that made these speaking engagements possible. Thank you specifically to Amy Hagopian and Eva Cherniavsky from the University of Washington and to Christy Hofsess and Dan Rosen, Co-Directors of the Center for Social Justice & Diversity at Bastyr University.

“The Seattle Race Curriculum Controversy: How Exactly Did a Well-Established, Celebrated Study of Race Get Shut Down and What Can We Do to Prevent Such a Situation from Ever Repeating?” with Jon Greenberg

THE BENEFITS AND COSTS OF BEING AN ALLY FOR RACIAL JUSTICE:
A Case Study of a Race Curriculum Controversy in Seattle Public Schools

From health care to education, race-based disparities persist in our community. Learn about the efforts of teacher Jon Greenberg to address them in the public high school classroom—efforts that came with a great cost during the 2012-2013 school year.

After ten years of teaching a unit on race and racism, the district supported the complaint of a white family pushing for a colorblind approach to race, first by suspending the race curriculum and then by transferring its teacher. Learn more about these events, the curriculum, and the resistance efforts of students, the greater school and community, and prominent elected officials.

While the costs of fighting for racial justice can be great, Greenberg has found that the rewards far outweigh them.

This is also a great time to announce that I, along with teachers Gerardine Carroll and Susan Stahl, have been chosen to present on the Race Curriculum Controversy at The White Privilege Conference (WPC)! For those unfamiliar with WPC, now in its 16th year, it is a conference that “examines challenging concepts of privilege and oppression and offers solutions and team building strategies to work toward a more equitable world.”