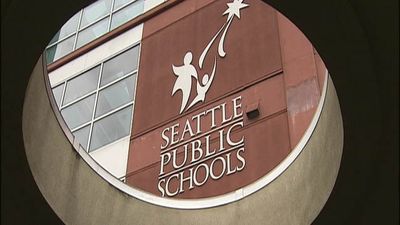 By Gerardine Carroll, Jon Greenberg, Chelsea Palmer, and Molly Pritchard, all of whom are public school teachers and Seattle Education Association members

Note: This article was written on September 14th, and the data included reflect that date.

Since the Seattle Education Association (SEA) voted to strike, teachers have been at the center of public scrutiny and a national discourse. Are they overreaching? Are they asking for too much? How long will they draw this out?

And the scrutiny is understandable since it was teachers who voted to strike. (Keep in mind, though, that it wasn’t just teachers; instructional assistants, office staff, counselors, speech language pathologists, nurses, and many others joined teachers in the historic vote.)

However, it makes just as much sense to scrutinize those on the other side of the bargaining table: the district. After all, educators did not vote to strike in a vacuum. They voted in response to a district that has thus far escaped the same level of scrutiny that teachers have faced.

Before we continue, understand that we are by no means proselytizing SEA members. On the contrary, during the first year of a protracted conflict with the district, we became so disillusioned with the union’s status quo that, in the last SEA election, we threw in our support with candidates who promised a more action- and justice-oriented union.

Understand also that we are not writing to convince you to support our strike efforts. (For those compelling arguments, please read here, here, here, here, here, here, and here.) This piece isn’t a rehashing of the need for a fair contract. Rather, it’s a call for fair scrutiny of the two parties involved.

It’s the district’s turn to spend some time under the microscope. Here are five reasons why it’s so difficult to trust our district, Seattle Public Schools (SPS).

1. The district has a history of hiding money in its budget

Following the last legislative session, the district now has nearly $40 million in additional funds to spend. According to the SEA bargaining team, district leaders claim that the majority of that money is already allocated and that there is little left.

When have they said that before? Well, they used to say that every spring, as the district understated the money available for each building and schools divvied up their district-allocated, barebones budgets, a process that cut staff and fractured programs. All the while, the district consistently held millions in reserve.

In 2014, the union called the district on that claim, encouraging buildings to reject the allocations. When we did, the district miraculously found the money, rescinding cuts district-wide.

2. The district has a history of finding money for its executives

As the public debates teacher salaries, let’s also look at the salaries of the executives at district.

Superintendent Larry Nyland receives $276,000 per year in salary, which is over four times what an 8-year veteran with a Master’s degree makes. Does he work four times more than a veteran teacher? Does he work 65% more than Governor Jay Inslee, who makes $110,000 less than our Seattle superintendent.

Some of the highest paid administrators received increases of 4% or better of their total pay from 2013-14 to 2014-15. Assistant Superintendent Michael Tolley received a 9% increase in total pay. Meanwhile the district’s latest offer to SEA is an 8.95% increase of base pay over three years, which translates to something more like 6.7% of total pay. Do top administrators deserve greater pay increases than do the teachers?

The district even doled out $85,000 on a superintendent search that landed us José Banda—who jumped ship after year two of his three-year contract, even after receiving $18,000 in moving expenses.

3. The district has a history of mismanaging money

As the public debates teacher salaries, let’s also revisit financial scandals. Seattle Public Schools has experienced two within one decade (at least that we know of).

In 2003, Superintendent Joseph Olchefske, (ironically) a former money manager, overspent $34 million because of poor accounting controls, an oversight that led to his resignation.

In 2011, Superintendent Maria Goodloe-Johnson received her pink slip after auditors found up to $3 million misspent, an error that landed one district employee in jail.

4. The district has a history of failing special education students

A long history, actually. In fact, Seattle Public Schools is currently being audited by the state Office of Superintendent of Public Instruction, and its lack of compliance has lost the district $3 million in federal dollars. In 2012, The Seattle Times reported that within a five-year period, special-ed-related lawsuits quadrupled. Special education leadership has changed hands nine times in the last six years.

Several fundamental special education issues remain unresolved in bargaining. SPS has proposed caps on the caseloads of Educational Support Associates (ESA)—speech language pathologists, occupational therapists, counselors, and psychologists, to name a few. However, the ESA caps are based on averages. Thus, some speech language pathologists, for example, may have caseloads far above the “cap” of 47. The district is also proposing a special education PreK caseload of 10 but, because of circumstances stated in the proposal, this “cap” actually allows up to 14 students without penalty.

5. The district has a history of ignoring its own policies

Last December, even two Seattle School Board directors called out the Board’s inability to follow district policy. The district’s history of this practice sheds light on the current bargaining. Key negotiating points revolve around equity for underserved students, especially our special education population, which is disproportionately poor and of Color.

In 2012, the Seattle School Board passed the landmark Ensuring Racial and Educational Equity policy, which mandates the use of the Racial Equity Analysis Tool in “significant” matters, including “instructional practices” and “budget issues.” The district has repeatedly failed to use it.

In the case of Center School’s Jon Greenberg, one of our co-authors, the district failed to use it to investigate one White family’s claim that the way Greenberg taught the Race Unit was “intimidating” to White people. The district neither used it when it banned Courageous Conversations from Greenberg’s curriculum nor when it transferred him to another school, effectively ending the Race Unit (at least temporarily).

Most recently, the district failed to follow policy and use the tool in its decision to close Middle College at High Point, which has a long history working with underserved populations. Despite tremendous opposition from the community, the district shuttered the school at the end of last year, citing a savings of $28,000 per year—10 percent of Superintendent Nyland’s annual salary.

Tomorrow, our strike enters its fifth day. We realize the effect of our strike on parents/guardians, who must find childcare for the students usually in our classrooms.

We know many workers in our expensive city envy the salaries and benefits of teachers. We empathize with those who are confused by some of the local media’s portrayal of a fiscally responsible district.

We can assume the district is run by good people but, as an institution, it has a history littered with misinformation, mismanagement, and hypocrisy.

This history too merits public scrutiny and deserves a place at the table in this national discourse regarding the Seattle strike—a strike set into motion long before the union ever voted for it unanimously.